The IGEP (Indo-German Exchange Programme) was introduced in Spring 2013 as a vibrant cultural and educational exchange initiative between the leading International Baccalaureate (IB) school, Jamnabai International School in Mumbai, India, and the vocational school Rudolf-Eberle-Schule at Bad Säckingen, Germany. The EUMIND (Europe Meets India) Project TVET 1 (Technical and Vocational Education and Training 1) was added on to a small, existing international studies programme for young adults in the school education system.
In  2014 students focused on studying “History of TVET in Germany and India”

​The  Indian-German Exchange Programme (IGEP) between Jamnabai Narsee School and Rudolf-Eberle-Schule has been initiated to study and to analyse the features of production lines of Mahindra & Mahindra Ltd. and Mercedes Benz AG automobile plant during their exchange programme of each 16 days as one of the points of the itineraries in India and Germany.
Both groups of exchange students visited Mercedes Benz AG plant in Sindelfingen and the German exchange students visited the Mahindra & Mahindra Ltd. automobile plant in Mumbai.
The report outlines the interdisciplinary approach with comparative study on history of production lines, environmental studies, design of new technology and products, business features, economic implications and automobile engineering.
This project impels students to develop an insight and acumen to understand the needs of respective countries. The best of the features can be proposed to the automobile industry for both countries.
It ignites passion in students to consider automobile engineering as their career.
The report highlights and features the current facts and figures, reinforming on sustainable developments.
​Read the full report below

Report on the 2016 exchange. Exploring a new dimension of the economic system, “Distribution - Transport or Transformation?”

​
The IGEP (Indo-German Exchange Programme) was introduced in Spring 2013 as a vibrant cultural and educational exchange initiative between the leading International Baccalaureate (IB) school, Jamnabai International School in Mumbai, India, and the vocational school Rudolf-Eberle-Schule at Bad Säckingen, Germany. The EUMIND (Europe Meets India) Project TVET 1 (Technical and Vocational Education and Training 1) was added on to a small, existing international studies programme for young adults in the school education system.

In  2014 students focused on studying “History of TVET in Germany and India”, and in 2015  students investigated “Production Lines - Challenge of Companies
The 2016 chapter aims at exploring a new dimension of the economic system, “Distribution - Transport or Transformation?”
As part of this project, German students observed the Indian dabbawalas in action at Vile Parle train station, while they loaded, sorted and transported thousands of lunch boxes from and to different parts of the Mumbai city via the local train and bicycles. The Indian students, on the other hand, had a field visit to the German Post Distribution Center in Villingen-Schwennigen where an automated reading, categorizing and sorting system prepares letters and parcels for delivery by postmen.The project aims at the following objectives:

1. To expose the students to an integral system of an economy
2. To acquaint the students of each country with the socio-economic context
3. To reflect on the similarities and differences between the two economies and societies
4. To evaluate the impact of the distribution system on society and the welfare system 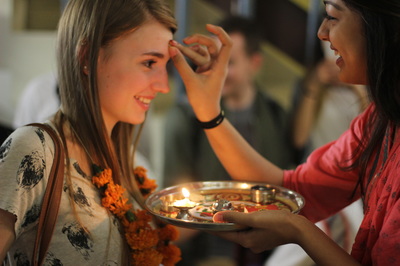 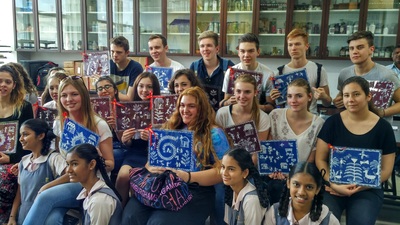 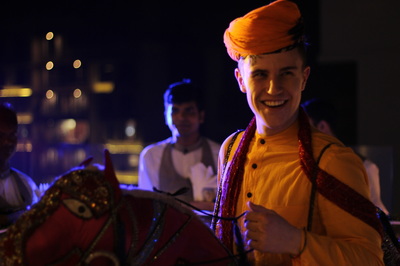 The third chapter of the Indo-German Exchange Programme (IGEP) between Jamnabai Narsee International School and Rudolf-Eberle-Schule in Bad Säckingen from February 3 to February 13, 2016. Part of the prestigious EUMIND (Europe Meets India) Project, the IGEP has been highly successful in fostering the true spirit of international-mindedness. Nineteen Grade XI IBDP students played hosts to their German counterparts, making them a member of their homes and hearts.

While the German students made a presentation on the history, arts and politics of their country, the Indian students acquainted them with Indian folk music, Bollywood films, Indian religion and clothes through lived experiences. The German students got the opportunity to witness the folk artists from rural India and hear the authentic voice of our traditional culture. At a makeshift open air theater, watching a Bollywood film served as an entertaining window to the Indian cultural nuances, individual attitudes, social norms and festivities. Being a youth-centric film, the students were able to find universal resonances in the conflicts and issues of the young protagonists.

As an orientation to the CAS (Creativity Action Service) component of the IBDP, they also visited the REAP (Reach Education Action Programme) NGO centre in the underprivileged sections of Kalwa in Thane.  The immersion into a whole new sociological and geographical location created new lensview for the German students to look at the historical development of India and its consequences. Creative endeavours included the traditional tie-n-dye activity, Zumba dancing, Warli painting, yoga, Hindi class and photography.

For a collaborative Business and Economics project, the German students observed the distribution system of the Mumbai dabbawalas. This unique economic sub-structure acquainted them with the organic and efficient functions and processes that a busy cosmopolitan city like Mumbai has developed for sustenance. An industrial visit to a ground systems manufacturing unit in Badlapur gave them a peek into entrepreneurial India. As students of Business and Management, they were able to appreciate the intricacies of ground level industrial manufacturing as well as the inter-connectedness of local Indian economy with global import and export.

The musical fusion at the Farewell Assembly manifested the essence of the cultural and emotional exchange between the two groups. Heartfelt speeches, tokens and gifts mingled with moments and memories to become a fitting farewell to an incredible experience. JNIS students will visit Germany in June 2016 and carry forward the spirit of the IGEP.

Having Tilbe (my daughter's exchange partner) home was like having another daughter. She was wonderful and very adaptive to our Indian ways and cultures. As parents, we look forward to such vital interactions among students of various cultures and countries so that our children become versatile and adaptive.

Mrs. Kalpana Iyer
This was the first experience of an exchange program for both my daughter, Nimisha Mazumdar, and me.  We had a German student, Sydney Zumkeller stay with us for 10 days. The interaction and the opportunity to stay with a host family helps the students learn important lessons - understand and accept cultural differences, different approach to academics and how it impacts the learning outcomes. It also enhanced their social interactions particularly for students who had language barriers; not all of the visiting students were fluent in English but that did not stop the students from connecting with each other and learning from each other and finally tasting and eating different cuisine. Sydney was very happy to have Indian meals cooked at home - be it the South Indian meals of idli/dosa for breakfast North Indian paratha and biryani or even some of the Bengali dishes that my mother-in-law cooked for her.

Our school, JNIS, got the parents involved in planning the schedule and that gave the parents an opportunity to interact with the visiting students and the faculty and those interactions were lot of fun and entertaining for all of us as well.

Mrs. Deepti Aggarwal
To begin with, I was very apprehensive about having a teenager about whom I know nothing, coming from a foreign land not knowing if she knew our language, living amongst us. I was also apprehensive about whether I would be able to make her feel comfortable. But all my doubts and anxiety were put to rest when I met her at the airport. It was like I was meeting a child just like my own. All my inhibitions vanished.

I want to thank the school for allowing Roshni to experience this wonderful programme. It was a learning experience not only for her, but also for me and my family. We met these children who are so well behaved and well mannered. Also, seeing them wanting to know more about our culture was truly heartwarming. My guest wanted to know about our rituals, our food. Seeing her enthusiasm for wanting to try everything was a wonderful feeling. I also saw my family welcome this child with open arms.
I thank this programme for bringing us close to a foreign counterpart and thereby giving us a window into another land and another culture. 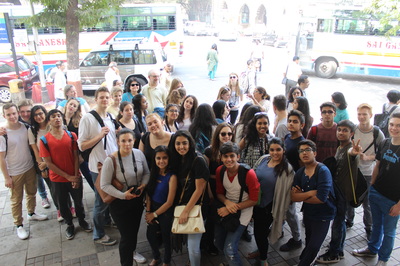 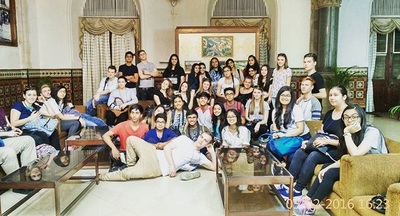 Inside the CST Railway Station 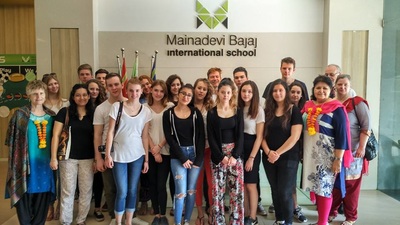